Grappling with a shredder 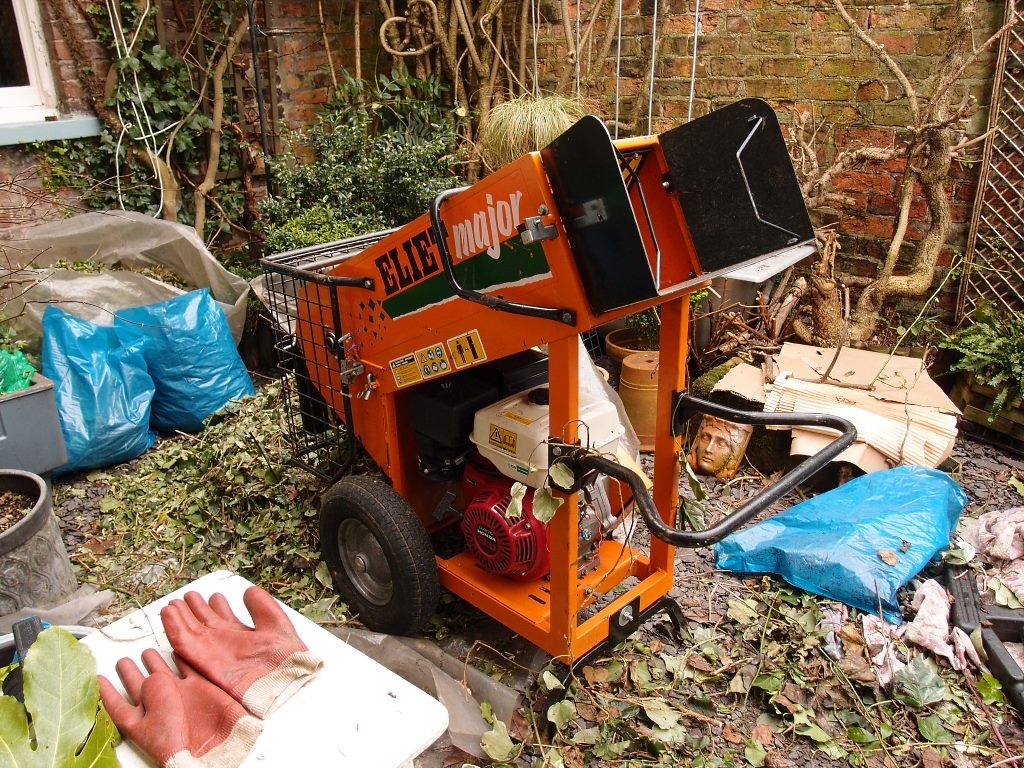 Hired shredder at work in the garden, March 2016

A couple of days ago I grappled with a garden shredder, an experience I’ve previously managed to avoid. It had seemed like a good idea, for two reasons. Firstly, that I had a huge pile of green waste, mainly evergreen and woody stuff, and no transport to get it to the green waste recycling at the tip. Secondly, the soil hasn’t had as much enrichment with organic matter in the last couple of years as it used to have before, and I thought I’d try making use of what was available already, to provide that.

And what was available was this: 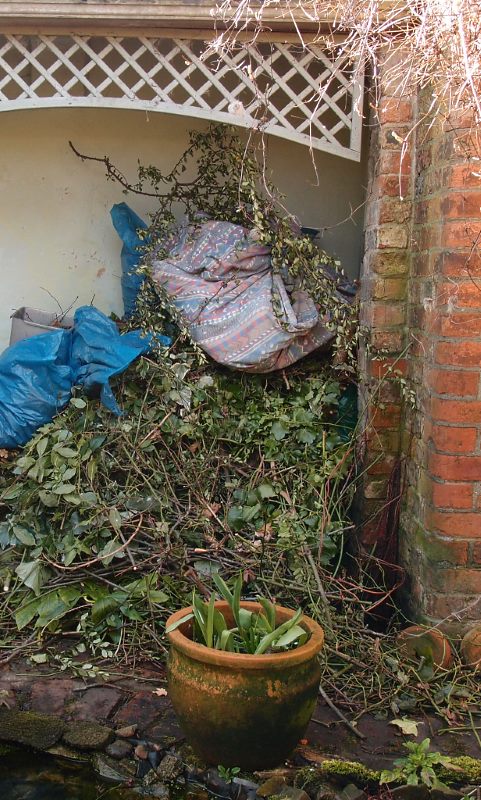 Actually that was only part of it. There were other heaps dotted around the garden. Loads of it. Thorny pyracantha, heaps of ivy, a few shrub and tree branches.

The only option seemed to be to pay someone to take it all away.
Or, I realised after some thought, I could hire a shredder to chop it into smaller pieces, which might mean it could be stacked to rot down, might do so more quickly, and could be reused on the plot of land where it had grown.

It made sense, but was rather an unknown thing. I had to then go and research shredder hire. The larger hire places had electric shredders which were, apparently, relatively quiet in operation. That sounded good. I’ve seen/heard shredders in operation before, and they’re noisy.

But using a more local, smaller place seemed more environmentally friendly and also supportive of the local economy, so enquiries were made there, and the chap there had only a petrol-powered shredder, and said that electric shredders were a bit rubbish.

So one day in early March the hired shredder arrived. It was a beautiful clear morning, sunshine and blue skies. All still, with birds gently twittering.

I could hear my next door neighbour out in the garden, secateurs clipping greenery from the fence on their side, presumably enjoying the peaceful morning and the wonderful stillness.

And then we started the shredder. Which ripped through the peace and quiet with a hideous cacophony of engine noise.

We fed in some of the green waste. It made even more noise, chomping through it and spitting it all out at the other end. We shouted over the top of it but couldn’t hear what the other was saying. We fed in more greenery.

And then it shuddered to a halt. So we turned it off as we’d been instructed and poked about at the business end and worried that we’d broken it already. And looked at its various controls, which included a choke and some kind of accelerator thingy, and I realised I had no idea what these things did.

After some faffing about it became clear that I should do what I always do in these circumstances, and Google It. An instruction book would have been helpful, but we hadn’t been given one of those. Perhaps everyone else in the world has some kind of innate knowledge of garden shredder workings and launches into the operation of these machines through some kind of instinctual knowing. But I needed a YouTube video demonstration and then further searching for the PDF of the operational instructions. Which I then had to read twice, with examination of the features it mentioned between first and second reading, in order to feel at all confident.

Even then, I wasn’t confident. I was quite scared of the thing. It was covered in big bold warning notices. One was pretty clear – don’t stick your hands in it. The other appeared to be warning against dancing enthusiastically while shredding. 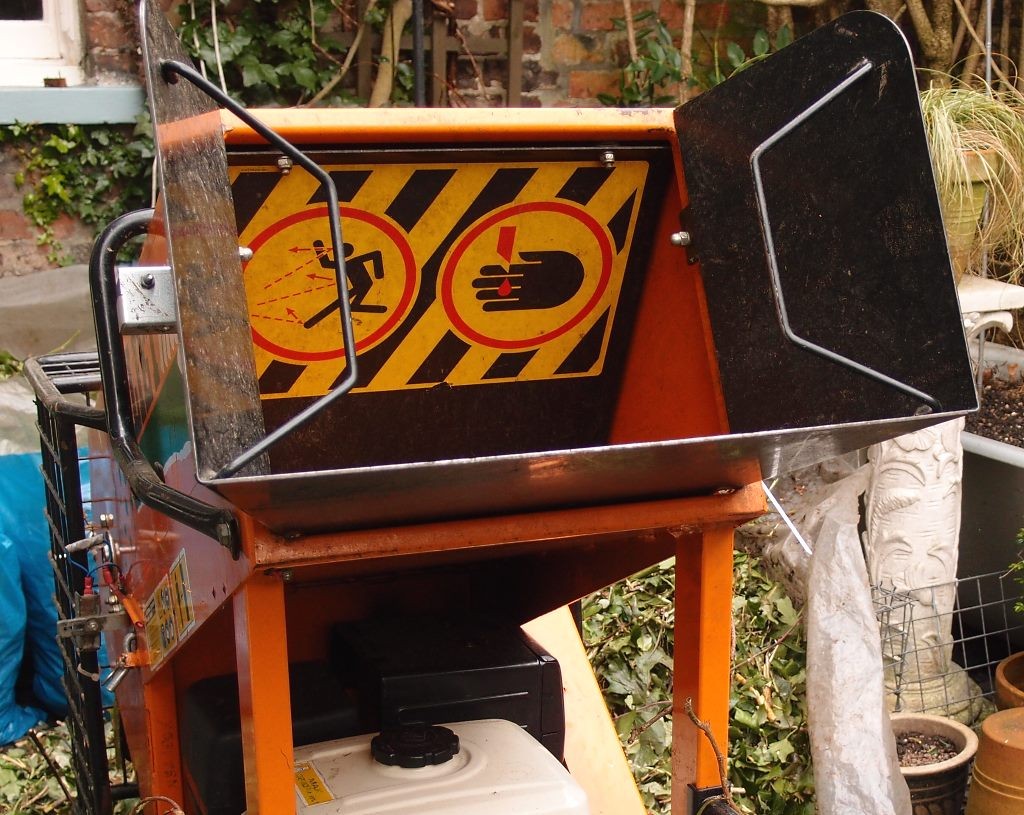 The chap on the YouTube video had been blithely feeding big branches into his and wandering off to get more with the thing chugging away happily, turning them into chipped wood with what looked like a minimum of effort on his part.

I felt like it was some kind of battle, woman against machine, as I managed at last to get the thing working for more than five minutes without it sputtering to a halt, and I kept dragging over the great piles of waste and then feeding it in, shoving it down with the plastic plunger thing supplied with it. This was all chewed up at the end, having clearly made contact with the shredder’s teeth at some point, and was perhaps given to newbie shredder users like me, as an alarming warning against sticking your hand in when it went wrong.

As if I would. I remained wary of the beast, as it filled the garden with its hideous cacophony, while stinking of petrol.

After an afternoon of lifting and carrying and bending and shoving came the bagging up of a huge heap of shredded greenery. 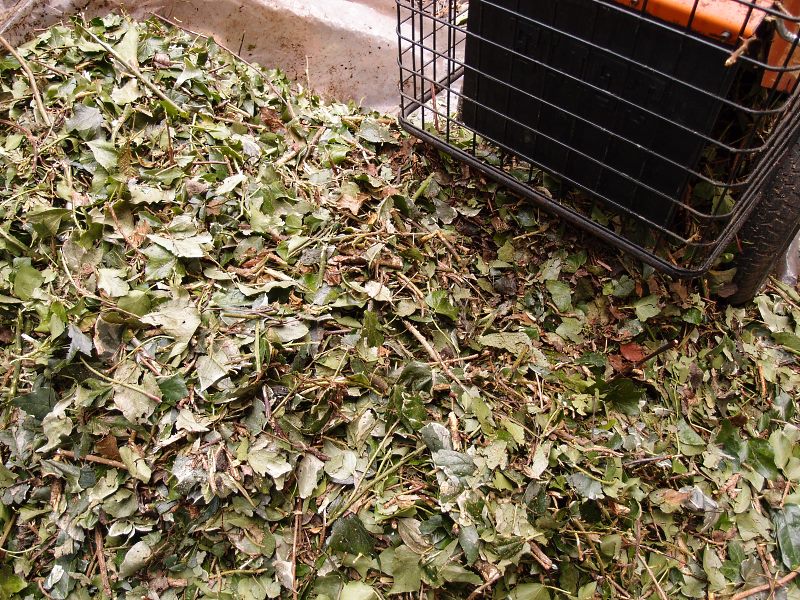 By the end of that I had that low nagging back pain where you realise you have to move carefully and slowly and not straighten suddenly. The next day I was fit for nothing, aching all over.

It was worth trying once. But next time there’s a huge pile of ivy and other prunings too big for my compost bin I think I’ll go for the easier and probably much cheaper option of paying someone to take it away, rather than paying for a noisy smelly machine to bash it all to bits.

If this bashed-up green waste turns into reusable organic goodness vaguely resembling compost or mulch that I can put back into the garden to enrich the soil then perhaps it will feel like it was worth it. I’ll report back on that perhaps, in due course.